Pregnancy Update (Almost 22 Weeks) & a Memorial to a Courageous Woman

So, I’ve mentioned in several of my Instagram posts and stories that I’ve been diagnosed with some pregnancy complications and how that has led to me being on a modified version of bed rest. Until I had a better idea or “confirmation” of my diagnosis, I didn’t want to formalize anything. But this morning, my MFM (Maternal-Fetal Medicine or “high risk” doctor) called me with the results of the MRI I had yesterday and confirmed what I can now share with you. Here’s my story so far…

Because I was to turn 35 right before my original due date, they considered me “Advanced Maternal Age”. (Way to make me feel even older.) What that originally meant to me is more testing than usual, and light-heartedly, I was just excited that I would have blood work done at 10 weeks to find out the gender much earlier. Of course, when you’re pregnant, you feel the joy of all of the blessings that babies bring and don’t focus really on potential negative outcomes that could come from these testings. Well, at least I didn’t.

The genetic testing came back perfect and we were ecstatic to find out we were having another little girl. Honestly, I didn’t care much if it was a boy or a girl, as I already have one of each. After the journey we have been on to be able to have this baby (see original blog post for more on that), I would take ANY baby God would give me! Skip forward to my 18th week of pregnancy, and it was ordered that I have a “Level 2 Ultrasound”. I guess this is typical when you are considered AMA. I was excited to just get a good look at the baby from a 3-D perspective and didn’t even consider the fact that I might find anything alarming when I walked in that day.

I remember the US technician being very quiet. And me, being the chatty Kathy that I am, talking her ear off and asking her if she could give me as much of a play-by-play as possible. She remained politely quiet, but I was starting to get the feeling that something was off. She said she was finished and that the doctor would be in shortly. The MFM that I saw that day was one of the most gentle physicians I’ve ever encountered. He came in and communicated the findings to me as softly as possible, but I remember the majority of it sounding like a foreign language.

He first told me that I have Complete Placenta Previa, which I’d heard of before but really knew nothing about. He showed me the US images on the screen and did another in-depth US on me while he was telling me about it. It was obvious to me that things looked very differently than what I was used to seeing in my previous pregnancies. But he also told me that many women have placenta previa and that things can change and move when you’re pregnant (though I later learned that probably wouldn’t be the case with me) and I just tried second by second to digest what he was saying. I remembered hearing about Kim Kardashian having PP and also remembered my best friend talking about another blogger who had shared her story with PP, when it was told to me very early in my pregnancy that I could have PP. But again, I didn’t really know much.

The photo below helped me to visualize what Placenta Previa looks like: 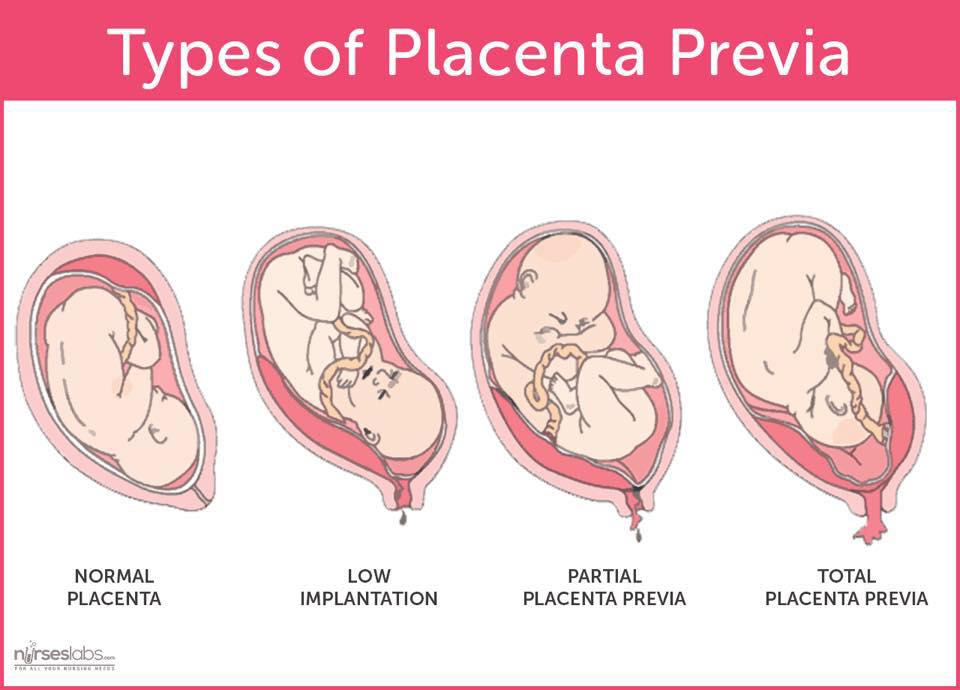 What I understood of PP was that it could cause early bleeding and preterm labor, but also understood that each case is very different. It wasn’t until later that I realized what exactly this could mean for my current situation, but the bottom line is that every single case is different and there’s no way of knowing your outcome until you just live it.

He told me that, in addition to the CPP, he was pretty certain that he could see a Placenta Accreta. I had NEVER even heard of this before, but I could tell from the change in his tone that this was serious, and so my tone changed immediately as well. He honestly didn’t tell me all too much about accreta that day, or what it really meant for ME or my baby, but he basically  said that it was a result of my prior c-sections and described it that my placenta had grown into my uterus and that he could see a good deal of blood flow down south that wasn’t supposed to be there. He showed me what that looked like on the screen and it definitely explained (to me) a lot of the “pressure” I had been feeling down there that I’d never experienced with my other pregnancies. He also explained what that meant for my PP as the baby can tend to gravitate to where the richest blood supply is, and mine is showing richly south of my uterus where the accreta was invading my uterus (and could potentially invade other areas with time). I know this sounds confusing… it’s still confusing to me, but basically the bottom line is that lots of blood flow= higher risk of mom hemorrhaging. So we just don’t want to see that.

For a few moments, both the doctor and the US technician had to leave the room, and I immediately picked up my phone to Google “placenta accreta” and find out what I was really looking at. I learned there are three levels of accreta: accreta, increta and percreta. 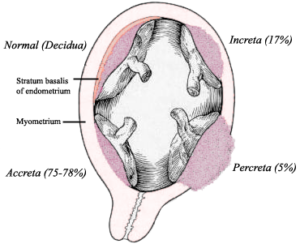 Yesterday I had an MRI to determine if my accreta was 100%, in fact, actually an accreta. And if so, to what extent has it penetrated the uterus. This morning, my doctor called me with the news I was praying not to receive. Not only had my placenta invaded the uterus (accreta) and gone past the uterine wall (increta), it most likely has started to invade other organs (percreta). Right now, we’re seeing it looks to have started to infiltrate the bladder. So, of all the outcomes, mine is the rarest and can be the most complicated.

At this point, I can’t tell you exactly what it means for me specifically. The doctors have told me to keep my feet up as much as possible, not to lift anything and to take this seriously as I’ll 100% be having a hysterectomy with this delivery. If you’ve read about what we’ve been through to have this child, I’m sure you can imagine how earth-shattering this news is for me. But if it means I can have this baby, healthy in my arms. And I can live to experience it… well, it’s the least of my concerns. I’ve also been prepared to have my bags packed as early as 24 weeks and that the potential for hospital bedrest isn’t highly unlikely. If I were to have any severe bleeds, my situation is extremely critical and could require constant watch. But again, all of these are uncertainties, and I will continue to pray every second of every single day for the best possible outcome that God could deliver and will hope for a miracle. I, for one, believe in miracles and know anything is possible with the power of prayer.

My support system is one that I can’t even explain. I don’t say this to be boisterous. I say this to honor and cherish the people that I have in my life. My husband is literally my angel. From the second we got this news, he’s stepped up to the plate 100%. From spending every second of his time with the kids, to grocery shopping and cleaning and helping to plan the holidays… he’s my rock. Even more than that, he’s constantly optimistic and supportive and genuinely the most caring and loving person I could ever have wished for in my wildest dreams. We’re surely not perfect. We can bicker like an old married couple. But then God shows us how life can test our vows, and EVERY SINGLE TIME… this guy steps up to the plate and reminds me why I chose the possible possible partner I could have asked for. Basically what I’m saying is this.. Jason Thomas Pfeiffer, there’s no soul on this planet who means more to me than you. I hope you never think I take a second of your love for granted and I hope that you know that NO MATTER what happens, you are my person and I thank God for you every single day.

Last night when I went to bed, I was shaken with some devastating news. You see, when I got this diagnosis 3-4 weeks ago, I immediately found and joined a support group on Facebook for women who currently have a previa/accreta diagnosis or those who are survivors of accreta. This group has been everything for me over the last few weeks, as this has been such a rare diagnosis that it has felt a little isolating and lonely at times. We lean on each other with questions, fears, success stories, and even yes… sometimes we’re faced with our greatest fear… those who do not make it through this scary beast. Last night as I was going to bed, I was shaken with the news that a beautiful woman in our support group passed away yesterday during labor from complications with percreta (the diagnosis that I was to wake up today to receive). As we all seem to fear from this diagnosis, she just lost too much blood and after delivering her (third) BEAUTIFUL little girl successfully, lost her battle with accreta  and went to the Other Side to meet our maker.

It’s impossible to understand how or why these things happen, but it’s definitely not the common outcome. (Though statistics say maternal mortality has been reported as high as 6-7% in women with this diagnosis, I’d like to believe in all the stories I’ve heard personally shared in our group that I don’t believe it to be that common.) But it does happen. And it happened last night to a courageous women who left behind a loving husband and 3 beautiful girls. I can only imagine what this family is currently going through, but I do know she has a whole community of women who have her constantly in our prayers and thoughts and we’re sending all of our love to her family during this extremely difficult time.

I can only imagine the financial burdens we will encounter from these difficult complications, and now Maribel’s husband is left to sort them out a single father of 3 girls. I ask of you… if it moves any of you to donate, her family has set up a GoFundMe account to help them through this difficult time. Every dollar counts, and I know they would appreciate any size donation.

Simple click on this link: https://www.gofundme.com/maribel-sanchez-memorial-fund and donate any amount you can.

Maribel Sanchez, I send you love and light and will pray over your family every single day. 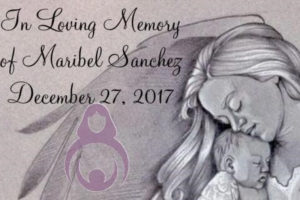 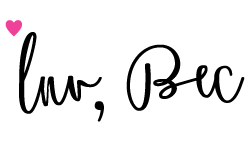 Our Behind-the-Scenes Experience with the New Disney On Ice: Dare to Dream

How to Style & Prop a Family Photo Session {And a Few of Mine from Years Past.}

Reliving Our Trip to The Oscars with World Market 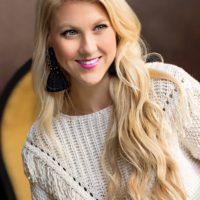 Thanks for visiting! I’m a Wife|Mom|Runner|Interior Stylist/Kitchen Designer in the Tampa Bay area. My little venture started by sharing my LUV of affordable fashion & home decor via social media and has grown into an amazing endeavor. Finding a deal and giving life to an important space makes my heart flutter.

Stay up to date!